I don’t have a keyboard with umlauts. It is correct to replace a vowel with an umlaut with that regular vowel followed by “e.”

I find it kind of obnoxious for a tutor to correct those words using the umlaut.

I don’t see any way to respond to corrections or report them to the administrator.

Hello @ejferguson!
It’s true that accents and special characters can be a burden when you don’t have the keyboard of the language in which you write!

You did well to write here, because many proofreaders will be able to read your message.

Maybe one thing you could also do would be to write a little note at the beginning or end of your journal stating that you can’t use umlauts? Then the tutors would know that they don’t need to correct you on this point

Have a nice day!

As a German student like you @ejferguson, I was told as well to use the “e”. So I think it is totally fine to just add it to the words. I’m sure the proofreaders will understand.

And just to be sure, is this a good recommendation @SKrausser? What do you think?

I have a French keyboard. For German and Spanish, I just learned the keyboard shortcuts to make the accents or specific letters that my French Mac keyboard doesn’t show. Another kind of vocab to get into a foreign language

Another thing I did at first was to have them in a document a copy paste them when I needed.

For sure it is a burden. But for me, as a learner, it was important to be able to have those accents and letters, since it can change the meaning of words

Except that it CORRECT to type words as vowel + e rather than umlaut.
It’s not like French accents where there is not accepted correct replacement.

How do I adjust the settings here where I don’t get notifications about this post emailed to me?

. And as a proofreader I also correct the accents in Spanish, even if they don’t change the meaning as every student expectations are different, and one needs to approach that diversity.

We will notify our proofreading team. Thank you, @ejferguson for the input.

@ejferguson you can see below all answers a button that has a bell and the “follow” option. If you click there, you’ll see the option to not receive notifications anymore.

@ejferguson Thanks for your question.
We understand that it could be hard for some students to use the German Umlaute or the “ß”, because most keyboards don’t support it.

Anyway, in standard German it’s not correct to write “ae” instead of “ä” etc. That’s why we always correct it. Sorry, if this made you feel bad.
You can just ignore this kind of corrections and focus on the “real” mistakes.

We are happy that you make good use of the journal corrections. Many students told us that the texts really help them to progress and also correct “smaller” errors.

As a native German speaker, I’d like to start with a little history. The two dots above the umlauts originate from a small e. In the Middle Ages, umlauts were still represented by ae, oe and ue. After some time, the e was written directly above the vowel. To save time, one wrote two dashes instead of the e at first and finally two dots. Over time, this became the official version. Texts are not only easier to read this way because we are used to this typeface, but also dictionaries only display words using ä/ö/ü/ß.

In recent times, when international communication became more and more important, with typewriters and computer keyboards, where space is limited and because of the history of these letters, it became accepted to use the spelling vowel+e in international documents.

However, in German-speaking countries, the letters “ä/ö/ü/ß” exist and for formal texts and communication, there is no alternative. For example, students in school or university can’t just hand in a paper using ue instead of ü.

To give another example, in German exist two different last names: Goethe & Göthe. They are not the same. Therefore I wouldn’t go as far and say it’s always correct to use ue instead of ü, but that it can be accepted if you don’t have any other way, @ejferguson.

Since the journals focus specifically on writing, our tutors do correct these things, even if to you it seems like something minor or annoying. Behind every journal correction, there is a human and I like Amandine’s suggestion to just add a sentence at the top or bottom of your text, letting the tutor know that they don’t need to correct the umlaut.

In order to adjust your forum email preferences, please follow this link: https://chatterbug.com/community/u/ejferguson/preferences/emails 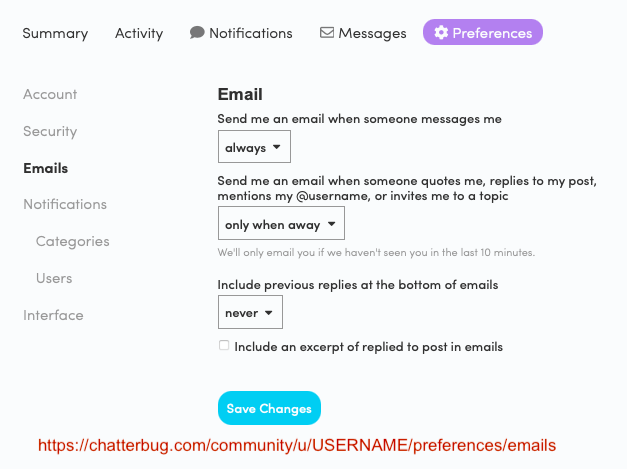 Hi Stephan,
The problem with focusing on the “real” mistakes is that they get lost when a tutor corrects every umlaut. When every word is highlighted as being changed, it is easy to miss “real” mistakes because it looks like everything is a mistake. I definitely agree with @ejferguson here. I believe it is clear that we would write with umlauts if we could, and that we know how to spell the word correctly, so correcting each one only distracts us from the actual mistakes.

Have a look at Janina’s great explanation!
But it’s okay, I’ll ignore the Umlaute in your texts

I don’t feel like what I’m saying contradicts anything Janina said, it was indeed a great explanation! Unfortunately if we don’t have a German keyboard, there isn’t much we can do except write an e, or pause at every third word to copy and paste a letter. Should I go to the tram station outside my friend’s house and correct the ue to an ü? Unfortunately, the way that the Chatterbug writing corrections display for the student, it becomes very overwhelming if each umlaut is corrected.

I do not understand why it should not be possible to use umlauts. You can install different keyboard layouts on each computer. Unfortunately, I could only buy an American keyboard for my Mac in Vietnam, but as you can see, I use it to correct ue, ae, oe and ss to ü, ö, ä and ß. It’s not that hard to remember that the z and y are swapped and the other 4 keys. I can use it blindly by now. Maybe the saying: Wo ein Wille ist, ist auch ein Weg, helps here.

“Should I go to the tram station outside my friend’s house and correct the ue to an ü?”

My girlfriend bought a laptop in Canada and she had the same problem with the missing Umlaut-keys. What @JensFrank suggested helped a lot. I think at the beginning she used a piece of masking tape on the specific keys and labeled them accordingly, but after a while she didn’t need them anymore.

Just curious, what’s the name of the tram station @MissAmanda? If it’s something like Suermondtstr.
it might be, because it’s named after a person, which still could be spelled “the old way”. In my example it would be Henry Suermondt who apparently was a big deal once - and who’s family name originated in the Netherlands.

Well, thanks for the homework @Toby, now I just had to go google

all of the umlautless tram stop names I’ve seen. All the ones I could find are indeed people’s names. Louisa-Schroeder-Platz, Anton Saefkow Platz, Roederplatz, Loeperplatz, and I had never heard of Suermondtstr but it seems we have one of those, too!

When I first became annoyed by this issue, I made a request directly to the Chatterbug team that the umlaut letters be added as a shortcut within the writing practice form. When doing study cards, there are built in shortcuts for umlauts (and accents in french and spanish), so clearly Chatterbug understands that not everyone has a German keyboard. It seems like a strange gap to me to not have this in writing practice too, where it is arguably even more important, but obviously the engineers have way bigger fish to fry, so here we are

I had considered this as an option, but one downside of this is that our texts are limited to 100 words, so writing a note takes up valuable space we could use on our assignment. I almost always submit texts of at least 95 words, so I would have trouble with this.

@MissAmanda I’m both sorry and thankful you googled them, now I have a definite answer to my hypothesis!

That’s actually a great idea for a feature request, but I think you’re right with the bigger fish… Let’s hope it’s not too far down the list!