Let me introduce you to a beautiful coastal village called Mossel Bay. 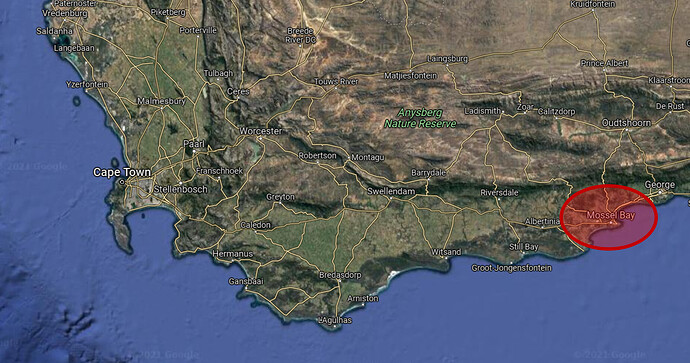 Mossel Bay is situated on the Garden route roughly four hours from Cape Town by car. With its beautiful beaches, wonderful holiday resorts and interesting history, Mossel Bay is definitely worth a visit. 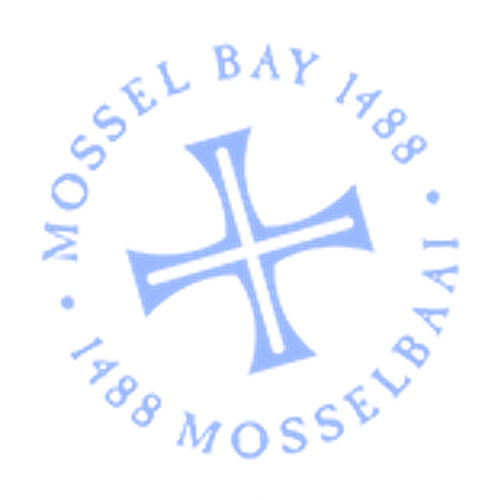 Mossel Bay was first named “Bahia” or “Aquada Sao Bras” (Watering Place of Saint Blaize) by Vasco da Gama in 1497. Prior to this, in 1488, Batholomeu Dias referred to it as Agra dos Vagueiros, a Bay of Herders, which he saw in the distance.

In 1646 it was written that the name “Mossel Bay” had been given by Paulus van Caerden in 1601. The description in the manifest read as follows:

“We found a lovely land, without many trees, but with deer and elephants. Apart from water, we got little refreshment except mussels, and therefore gave it the name of Mossel Bay.” 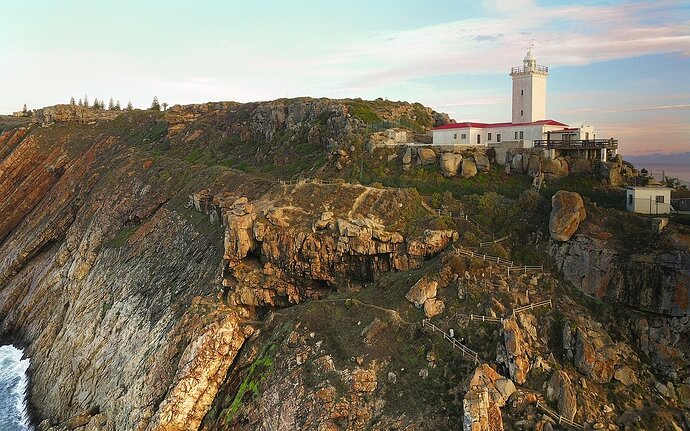 Mossel Bay offers a wide variety of places to explore. Here are my top three: 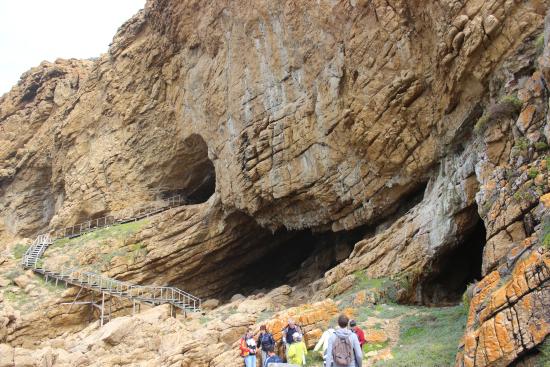 The caves are a key archaeological site and are known as the “Point of Human Origins”. Sharpened stones that were found in the caves at Pinnacle Point are believed to have been used as tools by prehistoric man according to scientists.

In 2012 the Caves were declared a Provincial Heritage Site. 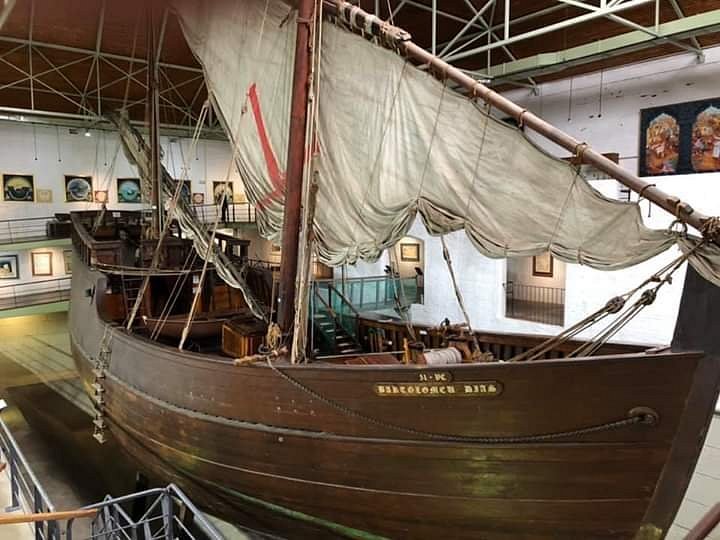 If you are interested in learning more about the history of Mossel Bay, this is the place to be. A replica of the Caravel on which Bartolomeu Dias arrived in Mossel Bay can be found within this museum.

Make sure to also take a walk around the beautiful gardens and don’t miss out on the historic whitewashed, thatch-roofed cottages (Munro Cottages). 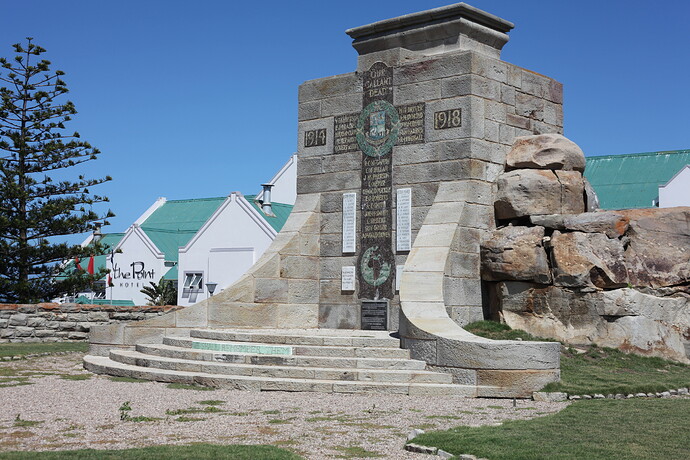 The Cenotaph is located at the Point in Mossel Bay. It is a memorial for fallen soldiers who perished during the First and Second World War, the Korean War, the Border War and the Iraqi War. Their names are inscribed on the face of this Cenotaph. 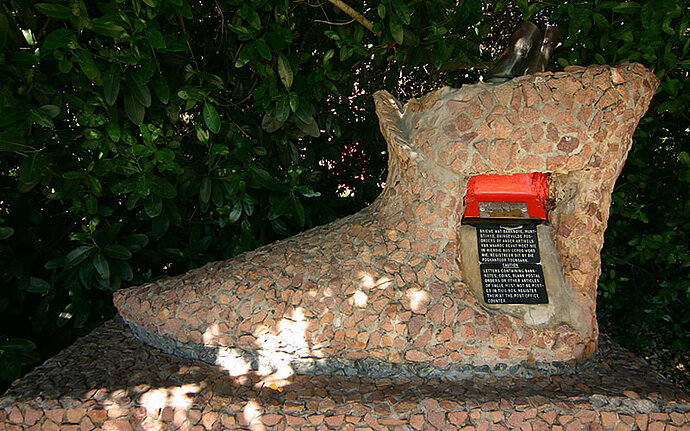 The Post Office Tree in Mossel Bay is a famous milkwood tree that was used as a post office by the early Portuguese explorers.

In 1501 a Portuguese navigator lost his whole fleet to a storm at sea. He decided to leave an account of the disaster in a shoe that was suspended from a milkwood tree. The note was found by an explorer and from there on out the tree served as a post office for many decades.

Recently, a boot-shaped post box was erected under this milkwood tree and all letters posted there are franked using a commemorative stamp. The tree and post box are two of the biggest attractions within Mossel Bay and many tourists take the opportunity to post a small little something by dropping it into the shoe.

Now that we have read a bit more about Mossel Bay, let me know whether you have any questions, comments or feedback!

I did a wildlife research internship in Mossel Bay when I was still a student.

It was amazing! I really fell in love with South African flora and fauna. Every day, wild springboks would visit our campus backyard.

I have so many great memories: from getting chased by a rhino

(!!) to taking a cheetah for a walk, watching a lion hunt

I also celebrated Christmas und NYE there, which was a whole new experience for me because December is the beginning of Summer in South Africa.

Interestingly enough, I have not visited any of the attractions you mentioned, @ChereeKr! What a shame! I spent most of my time on campus and in the nearby game reserves for our studies.

You’ve got to share this story about getting chased by a rhino, @Lydia_Schulze ! I’m intrigued.

Hi Lydia! Thanks for sharing! Judging by your stories, it seems like you had a very adventurous internship!

I once visited the Inkwenkwezi Private Game Reserve in the Eastern Cape. Half way through our Game drive we stopped for a quick cooldrink and a stretch when suddenly our ranger told us to get into the vehicle as soon as possible. What followed was about two minutes of pure panic and us trying to drive away from a chancing rhino!! I never knew they could run like that!

Yes, pretty much the same thing happened to me!

We were out in the game reserve doing some observational studies. Rhinos don’t normally do that much. Sometimes I would sit there for an hour and all I had written down was “grazing” or “sleeping”.

But yeah, this one time we found these two rhinos: an older male and a younger female (not a baby, though!) and the female tried to play with the male, was jumping around him and stuff. And we thought it was really fun to watch!

We would always be sitting in our 4x4, so we felt quite safe. One of us even asked our supervisor if he could get in the truck bed (?) to get a better look and our supervisor said yes!

When we were watching the female rhino one of the interns said, “Wow, she’s so cheeky!” and it was as if the rhino had heard it! All of a sudden she came running towards our 4x4.

Our supervisor drove full speed but tried to play it down, “We just have to get a bit further away. She will stop, they don’t run for long distances”, but the rhino kept chasing us for quite a while. We were panicking and screaming and laughing, all at the same time!

As you said, I couldn’t believe they could run that fast!

The female eventually stopped and we were all so relieved we had survived. Especially the guy who had been sitting in the back/outside the whole time!

Goodness me! That is quite scary! It sounds like you can write books on your South African adventures!

! That’s a story to remember. Poor guy on the back