I’m in a bit of a ‘Pronomen’ pickle and am not too sure how to get out of it.

I have worked through the rules which are brilliantly explained: 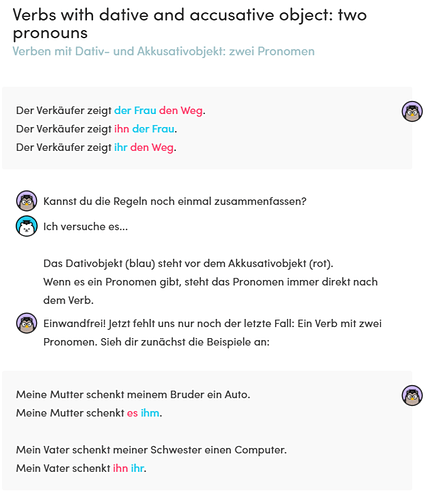 I have looked at the chart which I have not only memorized but also understand: 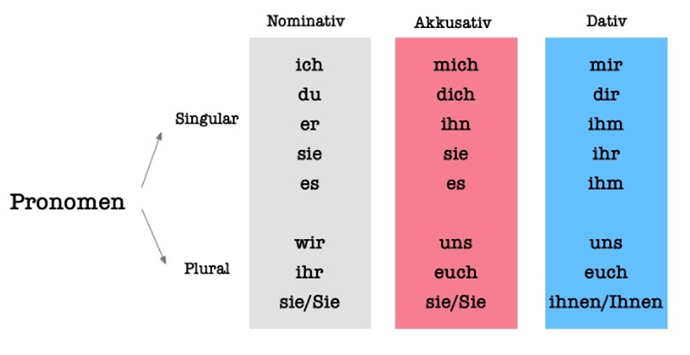 For some reason even though I understand the rules perfectly, I am really battling when it comes to applying them. Here is the activity that I was faced with earlier this week: 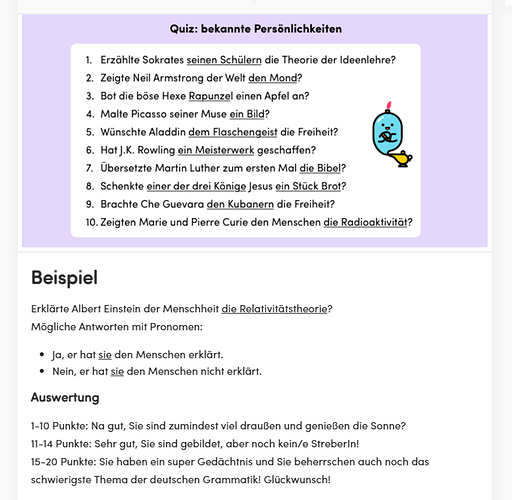 The word ‘tough’ doesn’t even cover it! Not only did I have to understand the questions and figure out the ‘Pronomen’, but I had to think logically as well!

My tutor deserves a giant high 5 because she did a brilliant job at helping me through this!

I’m wondering whether there are any “baby-step” activities available for me to get used to this concept before jumping to the “big leagues”? Without the help of a tutor, I don’t think I will ever be able to actually apply this concept, because I don’t think I practically understand it yet.

Any practical help/advice would be greatly appreciated!

First, I’d like to tip my imaginary hat to you, because understanding why and how we apply the different pronouns is more than half of the Pronomen-Marathon!

You are not alone in this!

To internalize those rules and get as comfortable as possible with them is like running the last miles of this marathon. So don’t give up!

Every lesson, every try (and yes, every failure, too!) is one (baby-)step in this marathon! And behind the next corner (a.k.a. LL), there might be a runners high waiting for you!

Enough with the bad metaphors! 🤦🏻😅

If students know how to differentiate the cases and their objects, they usually get way better at using the correct pronouns.

Unfortunately, there are a lot of different types of pronouns in the German language (7 different subsets), but let’s stick to the personal pronouns for now.

Where do you struggle most? Often it’s mixing up ihn (accusative) & ihm (dative), mich (accusative) & mir (dative), etc. because the English “objective pronouns” split up in two when it comes to German:

Okay, I can offer two ways that might help to get you out of your “Pronomen” pickle:

I hope I didn’t add to any confusion!

It’s complex stuff with all the charts, rules, and exceptions. I guess it boils down to repetition. The more you hear them and then use them yourself, the easier it gets! If you have further question, shoot!

Thank you so much @Toby! This is very helpful and I love the way you managed to break it down.

The shortcut is brilliant and makes so much sense! My issue always comes in with applying the various rules. I know and understand all the charts, but by golly is it sometimes difficult to know how to apply them!

I shall not give up!