Hi all!
Out of curiosity I would like to know from parents who are educating their kids bilingually if they had any tips for me. I live in Mexico but want to talk to my baby in german but I find IT extremely hard once spanish speakers are around. It feels weird…also my husband wanted to introduce english also but I feel thats too much all at once??? My little one is 3 months old next week.
Thank you 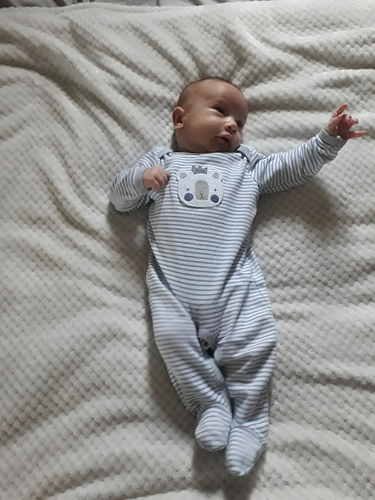 Ps: a foto of the reason I dont get anything done anymore because hes just too cute

One of the organizers of LangFest, Tetsu Yung, is a big proponent of and has given a few talks in relation to “One Parent, One Language” (OPOL). His son has been acquiring 5 languages and it looks like they’ve been quite successful. We even got to chat with his son Ronnie at a BBQ in the park and everyone was chatting with him in different languages and he had no issues responding back in the same language at all. Here’s a talk that Tetsu gave from a couple years ago:

Beyond that, I’ve recently read a book that was interesting, called “Children’s Multilingual Development and Education”. It’s actually quite dry writing-wise, seeing as it’s a summary of academic research and the audience is not parents, but other academics. However, chapters 5 & 6 chat specifically about how parents were successful with teaching their children more than one language in the home, and then how that translated to their schooling environment.

Thank you so much! I will definitely have a look at this!

A former colleague of mine (from when I was still working as a primary school teacher) is raising her kids multilingual. She grew up in Ecuador and went to a German school there, her husband is from Denmark. They both live in (the German-speaking part of) Switzerland. So they speak German, Spanish and Danish at home, which I think is awesome.

She is an amazing (language) teacher and has a website called “Multilingual family” where she puts up informational videos and material that could be interesting for you @Lari1108 .

Thank you Janina! I suscribed already. Looks like they have a lot of interesting material regarding this topic.
Thank you so much!

I would definitely talk to your baby as much as you can in German! My kids are teenagers now and fluent in German and I’m glad I always talked to them in my native language. It does get more difficult when they go to school and will talk Spanish (in your case). My kids spoke English in school and then, when I talked in German to them, they responded in English.

From personal experience (I grew up bilingual), and also from friends in my circle, I can’t stress enough how great it is to speak to your child in more than one language! I’m really glad my parents stuck to English even though we lived in Germany. Otherwise I probably wouldn’t have been able to talk to my grandparents and other family members.

Children are capable of so much, so don’t worry about overloading them. What you may notice however, is that your little one’s speach capabilities might develop a bit more slowly than those of monolingual children. This worries some parents but it’s normal and completely reverses once they’re older

You’ll also save your children a lot of time in future, I’m so glad I didn’t have to learn German or English later in life