@mgm recently told us about French tacos. And to stay in the area of haute gastronomie,

While doing some research, I discovered that the term “French fries” is subject to debate.

For some, the origin is indeed French.

It actually referred to the cooking process of immersing food in hot fat/oil, known in the newly formed US as “French frying”. Fries were first called “French-fried potatoes”, then shortened to “French fries”.

For others, it was only at the end of World War I that the term took off in the United States, when American soldiers who had tasted fries in northern France

returned home. Since the language spoken in those areas was French, they would have simply called them French fries.

For others, the word “French” used in the expression is not related to France at all but to an old Irish verb!

The verb “French”, of Gaelic origin, means “to cut into pieces”! Irish immigrants would have imported and popularized the term “French fries” in the United States and elsewhere during the 19th century… This theory is however less supported than the first two by linguists.

As you can see, several theories are in conflict and I haven’t even mentioned the debate that is raging to know if les frites comes from France or Belgium…!

And you, what do you think ? How do you call les frites in your country ?

. It is interesting one does not think much about the names until one gets closer to the culture. In Spanish, I would say “Papas a la francesa”. This one means the potatoes are french style

I’ve previously heard of the first two explanations (“french frying” and the WW I soldiers), but I have never heard of the Irish theory! That is a wonderful possibility!

Several years ago I read about the remarkable introduction of pommes de terre into France - c’est fou!! You must read this summary.

In the US, they are almost universally called french fries (lower case), although there are legitimate Belgian Frites shops in some cities (like Seattle). But that’s pretty uncommon.

Haha I like your fry-day pun!
Thanks for the article, I didn’t know how Parmentier ‘discovered’ potatoes but I knew what happened afterwards : the legend says that to make people want to eat them, the king had a huge field of potatoes guarded by guards as if they were something very precious!

Parmentier was so clever!

Here is a fry-related language question: we cook our fries in an air fryer, not in oil, to be a little healthier. (Like this machine.)

Oh my father bought one too, it works really well! We just call it une friteuse sans huile 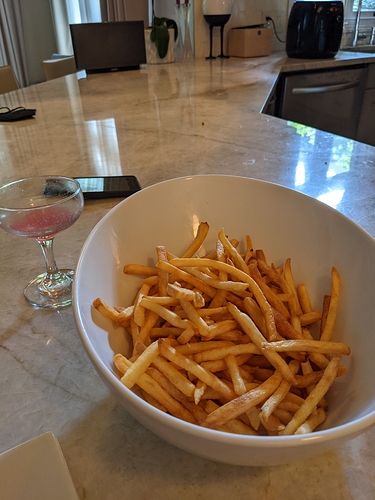